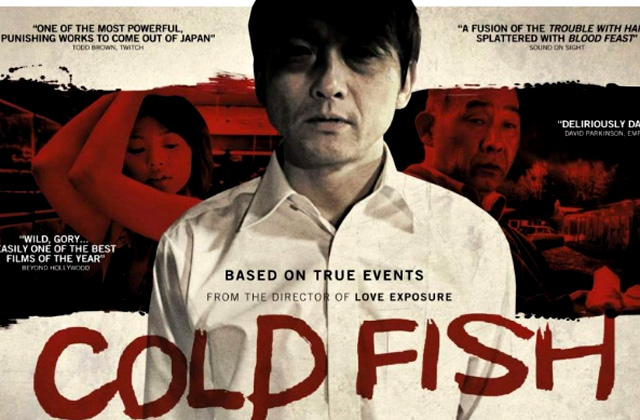 According to the director Sion Sono disclosed famous, film-based content with real cases of couples and Hiroko Kazama Gen Sekine, who killed people and cut the meat as food for victims of dogs in animal shops feed. But Sono said that the dog is very cute creatures and fish … as well, however, to use the images “cannibal fish” is still more offensive support dogs. He said listening “sweet” like that, but in fact this film is full of gore, flesh and blood flew everywhere, and the love scenes are filled with a lot of dark humor section. His films are much more severe than the original story, I guarantee it!
Cold Fish begins with images quick, cramped and boring of a small family consisting of 3 people. They have no hatred or shallow love with each other, but they feel “happy” when away from each other. Daughter, Mitsuko, petty thieves caught repeatedly in supermarkets and management here has asked parents to work Mitsuko. Here, they are Yukio Murata, a businessman, the owner of the fish store huge help and create stable employment opportunities for Mitsuko. For the reason that he Nobuyuki Syamoto, three of Mitsuko is also another small fish shop owners in the area, Mr. Murata therefore also want the familiar.
But there is actually as simple as that? Extremely slowly, with the first 30-40 minutes, Sono to play his sweet layer dissection by little, less showy but effective character introduction. Murata is gradual metamorphosis is an old, gruff laugh all day and frantically beating others. His wife is a hot lady, also emotional feelings, but despite her husband want to do it as you like. Mitsuko mother no more, the woman next to her current three stepmother, whom she regularly beaten for hate. Nobuyuki’s current wife, Taeko, partially injured Mitsuko, afraid her three, six sections bored with tedious husband. Nobuyuki also did not say anything but Syamoto know everything, he was spineless and Murata took fontanelle.
Muruta just escape for them, just dead. In memory of Nobuyuki kept echoing a doctrine: “The Earth is made from 4.7 million the previous year. 4.7 million years, the Earth will be destroyed “. Nobuyuki lives is this impasse. Muruta day meet, saying that even this man obsessed over. Nobuyuki is guys want Muruta of his limbs, because he looked gentle, make others trust. Since the moment decision, Nobuyuki to discuss business with Muruta, mass crimes were taking place.
Muruta enriched in any way? The old example to the business partner, cheated of money and killed instantly. The death toll of aging can be up to 58 people or more numbers. Later, the bodies were transported to a warehouse located in the forest. With all the many tips, corpses were dissected and broken down to the level of master key can not be realized. Bones and meat are divided neatly into two parts, the meat will be thrown into the river to feed the fish, the bones will be like watering and burned to ashes, scattered down the other side of the dam.
Aiko Muruta a very obedient wife and a skilled partner, absolute safety. She desires love and love, with anyone, any gender. Muruta not what Aiko restrictions, even ordered Aiko flesh relationship with another man and then kill their loan. All evil, dirty are easily prompted through the backstroke, the apple funny comedy scenes. Couple happy with his behavior, the victim before death also laughed a long time. Instrumental in building and maintaining the atmosphere of this bizarre mundane chatter belongs Denden (shoulder Muruta).
Too many scenes to squeeze the chest, stripped and what you usually see in romantic movies. At Aiko was naked relationship with Takayasu Tsutsui, she asked him numerous courtiers of Tsutsui see two people making love scene. Of course, he’s happy to enjoy his knees. That scene is like tantalizing the audience. Some of us also watch porn, some also sit still and just showing interest, others of course is how to sit still. It can be said: even though there are so many love scenes in the film but the scene is redundant sense.
Blood scattered everywhere, the blood of others, his own blood mixed together, Nobuyuki Syamoto human crimson. Sion Sono Yet he still deals poetic scenes, most beautiful film. It was a dream to find his happiness. That scene Syamoto couple watching the constellations from the telescope. That is the light freshness, green reflected from the aquarium. However, Sion Sono as of late as the hand, the image of Syamoto was objectionable under.
Perhaps knowing the terms of the desperation Nobuyuki then, police are useless to ridiculous levels. But may be due to Mitsuru acting Fukikoshi (Nobuyuki) most of the scene is the latest, with good acting scenes, but not throughout, did not push the audience’s emotions are going to climax, so most viewers to the scene were shocked. The reason why he is acting like that? What probably directed at the last minute, remember that I forgot to convey the message to the audience humanities should have helped resist such lower screen.
Cold Fish is generally quite different film than the previous film by Sion Sono. Also the contrast factor princess, but less charming, instead forcing the viewer to feel fear when looking at the statue of lord over. Along with tons of horror and loveual games, Cold Fish is considered the most difficult to swallow film of Sono.

New York Trilogy by Paul Auster – The grimness of literature